An Autobiography (of August Derleth) 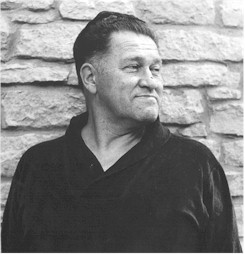 I was born 24 February 1909, in Sauk City, a small, largely German village, pleasantly situated on the west bank of the Wisconsin River in south central Wisconsin, one of two children of William Julius and Rose Louise (Volk) Derleth, who were, respectively, of French-Bavarian and Prussian-Pennsylvania Dutch ancestry. My writing career had been decided upon before I left St. Aloysius parochial school at Sauk City, and, indeed, at thirteen I wrote my first stories, certain that I could do as well—or as badly—as the authors of the short "filler" stories which followed the feature accounts of Old and Young King Brady: Detective, in Secret Service, which supplemented my reading of The Young Catholic Messenger, the novels of Father Finn, the nature lore of Thornton Burgess, and the mysteries of A. Conan Doyle and Sax Rohmer. Three years later I sold my first story to Weird Tales, proving that I could indeed write as badly as the anonymous hacks who wrote for Secret Service.

If anything had been needed to shore up my determination to become a writer after discarding inclinations toward the law and musical composition, publication of my first story in 1926 served. I began to write in earnest—for a while in collaboration with Mark Schorer, a schoolmate who has since become firmly established in academic circles as a critic and novelist—but primarily on my own, devoting myself initially to detective stories and supernatural tales, and gradually expanding into realistic studies of life in my home milieu, which I called "Sac Prairie." I wrote throughout my four years at the University of Wisconsin (B.A. 1930), part of the time under the sympathetic guidance of novelist Helen Constance White, ,nd throughout a brief editorial post with Fawcett Publications (as an editor on Mystic Magazine), then in Minneapolis. During my university years I wrote the first version of my autobiogaphical novel, Evening in Spring, and also the first group of pastiches of Shelock Holmes, the Solar Pons stories, which, though immediately published in magazines, were not to see book publication until 1945 and after. By 1932, my first serious work—the first portions of the Sac Prairie story—was appearing in such distinguished little reviews as The Midland, This Quarter, Prairie Schooner, and others.

During this time I had evolved the plan to tell the story of Sauk City and its twin village, Prairie du Sac, in a sequence of approximately fifty books, combining novels, novellas, short stories, poetry, journal extracts, and miscellaneous prose under the collective title of the Sac Prairie Saga. This plan might have been stillborn had it not been for the encouragement of my maternal grandmother, Mrs. Elizabeth Volk, and the patience and forebearance of my parents, who permitted me to live at home for almost a decade after I left my position in Minneapolis early in 1931 and came home determined to do or die as a writer. The summer of 1931 was spent once more in collaboration with Mark Schorer in the writing of a series of pulp stories, one a day, and every day was given over in a large part to writing, with my only recreations then—as now—being swimming and long hikes into the hills and lowland areas of my native country.

In 1933, a notice of the formation of a new publishing company, Loring & Mussey, appearing in Author and Journalist, tempted me to try the mystery novel as a form. I wrote my first Judge Peck mystery, Murder Stalks the Wakely Family, in ten days, and with it won a contract with Loring & Mussey. The first book was published in 1934. Its writing was followed by a rapid succession of favorable events—the achievement of a Roll of Honor status in the Edward J. O'Brien best short stories anthologies; the publication, in May, 1935, of my first serous book, a collection of related novelettes, Place of Hawks; a contract with Charles Scribner's Sons, then under the editorial guidance of the astute Maxwell Perkins; publication in 1937 of my first Sac Prairie novel, Still is the Summer Night, fulsomely praised by Sinclair Lewis, among others; and the awarding to me in 1938 of a Guggenheim Fellowship to continue my Sac Prairie saga.

It should not be thought that all my energies were devoted solely to writing. I found time also from the mid-1930's onward to conduct a Ranger's Club for young people; to serve as clerk and president of the local Board of Education; to serve as a parole officer for the County Court; to organize a local Men's Club and a Parent-Teacher Association, and to serve both in official capacities; to lecture in American Regional Literature at the University of Wisconsin; to further my collection of comics (as against adventure strips for morons), the world's largest, of which I hope to do a comprehensive study some day; and, in 1939, to found Arkham House: Publishers, devoted to the work of the late H. P. Lovecraft, Lord Dunsany, Algernon Blackwood, A. E. Coppard, and others, with its associated imprints, Mycroft & Moran and Stanton & Lee. In 1941 I became literary editor of The Capital Times of Madison, Wisconsin, a position from which I resigned early in 1960.

In 1939 I bought ten acres of land just west of Sauk City, a locally historic, heavily wooded spot, and there had a house of stone built for me, largely by my father, a skilled carpenter, one large enough to house my comics collection, my personal library (12,000 books), my record collection, and my even larger Arkham House stock, a house from which I sallied forth to lecture chiefly within Wisconsin now and then (though I took a swing west and a post at Los Angeles State College in 19,3), and to fill such posts as Visiting Lecturer in English at the University of Wisconsin. In 1953 I married, but the marriage ended in divorce in 1959, leaving me, happily, with the custody of our two children, April Rose and Walden William, who share in the same quality of affection which my parents lavished upon my sister and myself, for my parents then came to live with me to help rear the children. In 1960 I began editing and publishing a new little magazine of poems of man and nature, Hawk and Whippoorwill.

I have been called the most prolific and versatile of writers in the quality field. Something upward of 3,000 individual works of mine have been published in approximately 350 magazines here in abroad, including The Commonweal, Holiday, Story, The Catholic World, Extension, The Yale Review, The New Republic, Poetry, Redbook, (whose purchase of five novels caused my home, now named Place of Hawks, to be referred to as "the House the Redbook built!"), Coronet, Country Gentleman, The New Yorker, The Voice of St. Jude, Nature, The Dalhousie Review, Think, Good Housekeeping, The Saturday Review, The American Mercury, The English Journal, Scholastic, etc. etc. As of mid-1960, ninety of my books have been published, and some twenty are ready for publication.

My writing is in several distinct veins—apart from occasional history (The Wisconsin, The Milwaukee Road); biography (Still Small Voice, H.P.L.: A Memoir); journals (Village Year, Village Daybook); etc.—historical novels of (a) the Sac Prairie Saga (Wind Over Wisconsin, Restless Is the River, Shadow of Night—which was accorded the accolade of being one of the best Catholic books of 1943 by the Cardinal Hayes Literature Committee) and (b) a secondary Wisconsin Saga (Bright Journey, The House on the Mound, The Hills Stand Catch); short stories of the Sac Prairie Saga (Country Growth, Sac Prairie People, Wisconsin in Their Bones); poetry (fifteen volumes, for the Selected Poems, among which, Edgar Lee Masters wrote one of his rare introductions); modern novels (Sweet Genevieve, Evening in Spring, The Shield of the Valiant); juveniles (The Moon Tenders, The Mill Creek Irregulars, The Pinkertons Ride Again, Country of the Hawk, The Captive Island, etc.); three Vision Books—Father Marquette and the Great River, St. Ignatius and the Company of Jesus, Columbus and the New World—part of a series for which the publishers and authors received the Apostolic Blessing of His Holiness, Pope John XXIII; supernatural fiction (The Lurker at the Threshold, Someone in the Dark, The Mask of Cthulhu, etc.); pastiches ("In Re: Sherlock Holmes", The Memoirs of Solar Pons, The Return of Solar Pons); and mystery novels (No Future for Luana, Mischief in the Lane, etc.).

I have never thought of myself as a Catholic author, but rather only as a writer who is Catholic, and, apart from a novel in progress (The Lock and the Key*) and juveniles, have made little attempt at Catholic writing. The principal influences of my formative years were Thoreau, Emerson. H. P. Lovecraft and H. L. Mencken, in that order; such Catholic influences as I am aware of are but two in number—Augustine and Jacques Maritain, though I ought not to discount my admiration for Hilaire Belloc, G. K. Chesterton, François Mauriac, and Msgr. Ronald Knox, among outstanding Catholic authors. My literary influences, apart from Thoreau, were Thomas Hardy, Edgar Lee Masters, and Robert Frost, and, in work written purely entertainment, H. P. Lovecraft and Sir Arthur Conan Doyle.

My prolificity is a matter of economic necessity, and I have no doubt that the quality of my work has suffered to some extent because of its necessary quantity. The variety of my writing in itself keeps me from tiring of the creative process. One reviewer said of me in reviewing Village Year that it was evident that I had "travelled as widely in Sac Prairie as Thoreau did in Concord," which has always been my intention, since Sac Prairie is not only the center of my world but also the microcosm which reflects the macrocosm. I am much attached to this corner of the earth, not only because my family has lived here for over a century, but because it possesses great natural beauty in abundance, and it affords me that continuity in time and place which I find necessary for my wellbeing as a person and as a writer.

*This book was not completed and never published.